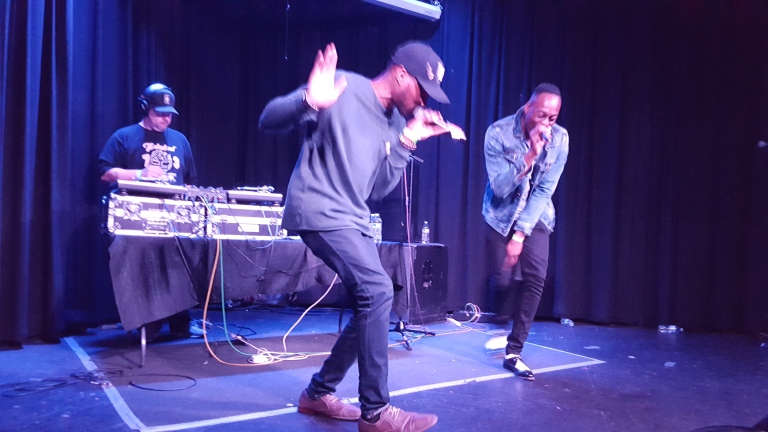 In 2017, when I started going to live shows on a weekly basis, one of the first things I decided to do was post a picture or video on my Instagram from every set I attended.  After a month or two of doing this, a handful of bands started to reach out and ask if I had any interest in checking out their music.  New Track City was one of the first bands I remember reaching out.  Not only was I impressed by the work that brothers Bem and Chi Stone had already released, but I was impressed by how authentic they were.  Interacting with them on social media, listening to their music, and seeing them perform live, you get a sense that they’re being themselves and are willing to put in the work to be successful.  With producer Dru rounding out the trio and news of an upcoming album, I’m excited to see where this evolving hip hop group will go in 2020.  I had the opportunity to interview New Track City recently.  Here’s my short interview with New Track City:

1.) Each of your albums have a fairly distinct feel from one another. My introduction to New Track City was the “The Damn Gina Tape”, but the album I find myself listening to randomly on the regular at my day job is “Lose Sight of the Shore”. The album has the great flow from Bem and Chi Stone, but Dru’s production really makes that project shine. How did you approach the creation of “Lose Sight of the Shore” different from your other work? Was it business as usual or did you have a concept for what you wanted the album to be when it was completed?

Man, “Lose Sight of the Shore” came out in August, 2017 and we remember being like yo… This is our first album with all original production, everything from the ground up is gonna be all us. We wanted the sounds to be colorful with live instrumentation showing everyone who our influences are, a throwback album with new school inflections with the overall message of motivation. Lose sight of the shore, it’s never too late to go after what you want no matter the circumstance and we feel like we accomplished that.

2.) I’ve always enjoyed the group’s Instagram page. It’s a mixture of cultural pride, and a celebration of modern hip hop. Every now and again you’ll say “this artist is one of your favorites”, but I always wanted to know, who do you feel are the top three best hip-hop artists of all time and why?

Wow, well it would be different for all of us and it changes but we all agree on Jay Z, Kanye West, Outkast or A Tribe Called Quest depending on the day. Reason being, Jay Z is every rappers blueprint to greatness musically and in life. He says bars that make sense years after you first heard them. Kanye West because he shaped the sound of music time and time again and opened the door for folks like us to even pursue music plus, he’s witty as hell! Outkast because they may be the most unique Hip Hop Act of all time from style, to how they rap, to their overall sound. Tribe’s PRODUCTION IS EVERYTHING, so we had to throw them in there.

3.) Kind of going off the last question, I heard in past interviews you mentioned what music styles inspired your style. There are styles that definitely permeate in your work, definitely jazz (Duke Ellington, Billie Holiday, etc.), but what kind of blew my mind was that you gave shout outs to ABBA, and also mentioned trying to rap over Butterfly by Crazy Town. Do you feel that it’s important that emerging hip hop artists today should explore styles outside of hip hop, and who are your favorite go-to non-hip-hop artists?

It’s definitely important for Hip Hop acts to explore outside of the genre because although Hip Hop is running things, it incorporates everything! To us, it only makes sense to reach outside the genre because that’s how you develop your own sound and keep the culture fresh. We have a huge list of artists we listen to outside of Hip Hop. Amy Winehouse, Red Hot Chili Peppers, Joss Stone, James Brown, Davido just to name a few.

Something I like to do to create a through-line for all the folks I interview is I ask the prior interview subject to provide 3 blind questions for the next interviewee with no knowledge as to who I would interview next. These next 3 questions were provided by my last interview subject, Whitney Petty and Molly Sides from Thunderpussy. Molly and Whitney ask:
4.) If you had to choose one thing to go away forever, would you choose vegetables or the wind?
Well, since we need wind to create renewable energy, we’d have to say get rid of Vegetables because fruits would still exist so that would take their place.

5.) Would you rather be in the air or in water?
Flying in the Air!!!! On some Superman / Thor stuff, that would be INCREDIBLE!

6.) If you knew the world was ending in 48 hours what would you try to accomplish?
This question is insane! Where do we even start!?!?! We’d tell our family and friends we love them. Leave all our valuables to them. Take a final drive listening to our catalog, take in one last view of nature catching a beautiful sunset reflecting on the life we lived and then yeah. Go meet Nipsey and Kobe in the sky.

7.) For my last question, I heard in a past interview you mentioned movies and television were art forms that inspired some of your work. What are three must see films or television programs each of you recommend checking out?

I have to thank New Track City (Bem, Chi Stone, and Dru) for taking the time to answer my questions.  Check out their website for news and events, follow them on Instagram, Youtube, and other social media, and keep an eye out for their next album some time in 2020.