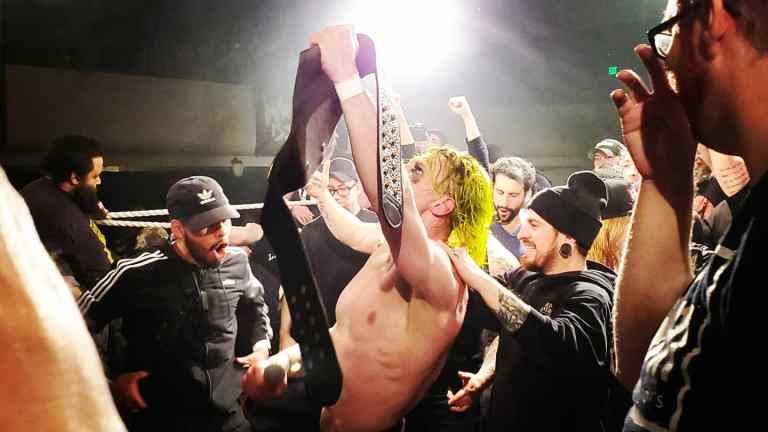 (In between show reviews and interviews, every two weeks “Do Anything Cool Lately?” will be a compilation of short thoughts and musings I’ve had while attending a number of shows in the Seattle area.)

On DEFY Kings of Crash…
(Above Image) Don’t get me wrong, I love that Randy Myers is the new DEFY Pro Wrestling Heavyweight Champion, but I feel like we missed out on a real “Hero’s Journey” style storyline for Randy.  My only knock against DEFY since I’ve been a fan of the company has been how erratic some of the company’s main storylines can be. Randy made a passionate speech where he pledged to get the title and within a month and a half he got the title. To really build his story, I would have thought he would have lost this first attempt, Schaff go on an epic title run, with Randy coming back more focused and dedicated at getting another shot, and then at a big summer show Randy try again and gain the title after re climbing that mountain. Randy winning the title clean was probably one of DEFY’s biggest title picture twists since the company’s inception. 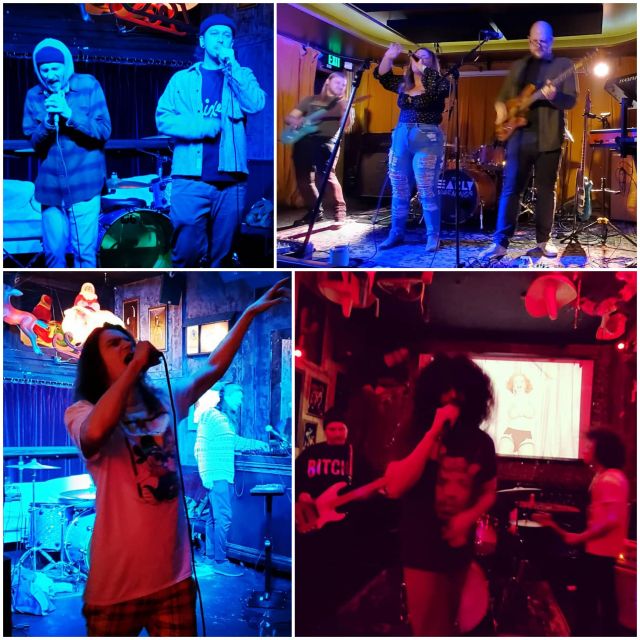 On how expensive it is to go to concerts regularly…
In February, I went to 4 concerts between the 13th and the 27th:
– Seattle University’s Battle of the Bands
– Marshall Law Band at Chop Suey
– The Early Warnings Album Release Show at Barboza
– Atomic Rust at Cha Cha Lounge
The combined ticket price for all four shows was $21.

On Early Warnings’ and The Bitter’s debut EPs…
I recommend checking out the debut EPs from local Seattle bands, The Early Warnings, and The Bitter. I would describe The Early Warnings as a mix of classic rock, country rock, and a little bit of dream pop. Their debut EP “Breakfast Club”, exemplifies the qualities that made me a fan of their live show, well balanced musicianship that support the very strong vocal style of lead singer, Danica Winkley.  On the flipside, The Bitter is Seattle’s next big afro punk band.  Folks who’ve seen their live show, would compare their music style to Rage Against the Machine. Their debut EP “Venom and Rage” feels like a frank and angry post punk critique of government and society at large mixed with stories of growing up in pre gentrified Seattle.
I wouldn’t be surprised if we saw more of these two bands in the years to come.

On Seattle University’s Battle of the Bands 2020…
Of the bands that performed at Seattle University’s Battle of the Bands 2020, I believe Goodwill Gold, Grace Stuewe, and Divine Comedy Club are ready to make a play at the Seattle music scene. Obviously, stay in school and get your degrees, but I wouldn’t mind seeing these bands perform more around the Seattle music community. Divine Comedy Club felt like psychedelic rock from the 60’s and 70’s mixed with modern dream pop (the drummer really stood out to me). Grace Stuewe played a lyric driven style of indie pop mixing guitars and synths. She was the only one with physical CDs on sale at merch (I bought one).  Goodwill Gold ultimately won the competition with a rock style that bordered on punk, in line with a number of bands currently playing around the current Seattle music scene.