The first time I saw Nick Weaver perform was on a Thursday night at the Vera Project.

He was the opening act for another local hip hop group, New Track City.  The crowd for Weaver’s set was small at first, but once he got on that mic it quickly grew.  If you ever get the opportunity to see Weaver perform live, be prepared for a level of lyrical fire you rarely hear in hip hop acts today.  Since that initial performance, I’ve seen Weaver kill it at every show of his that I’ve attended.  I’ll usually bring a friend or two to his shows, and Weaver never fails to impress.  I had the opportunity to ask him a few questions.  Here’s my short interview with Nick Weaver:

Lets start with something a little easy.  One of my favorite Northwest Hip Hop songs is Macklemore’s “The Town”.
1.) The opening line of “The Town”, First memory of Seattle Hip Hop?

Nick Weaver: Not pertaining to Seattle, but first time seeing hip hop in Seattle was Jurassic 5 at Bumbershoot back in 2001. They played in Memorial Stadium, such a great thing to see as a kid.

I read an older interview of yours from January 2015, where you mentioned that your big four of hip hop were Nas, Biggie, Jay Z, and Eminem. It’s been nearly 5 years since that article was published.
2.) Would you still say those are your big four and would you also say that those artists have had the most influence on your sound?

I definitely still think those 4 artists are the most influential towards my original style. To be honest, these days my sound evolves to something different everyday. The list of artists currently influencing music could be Hot Chip on one day, or Saba on another. Lol. It’s a rollercoaster.

I read one of your artist bios and your experience as a recording artist sounds fascinating. You went from mass producing your own first album onto one of those 100 CD spindles and then selling each one for $2 a CD, to getting millions of plays across streaming sites.
3.) Having experienced the transition from burning your own CDs to Streaming, what advice would you give artists today attempting this similar almost DIY approach?

I hear lots of my peers saying “I just don’t understand why Spotify isn’t giving me love.” It’s no question their music is great. But you absolutely have to have that fanbase that’s LOOKING for your stuff. You do that by playing as many local shows as you can, having engaging social media, and keeping a continuous release stream. Oh, and having money to invest in sponsored ads 🙂

@thenickweaver is one of my favorite local rappers. His albums are good, but you have to catch his act live to get the full experience. #seattle #seattlemusic #music #hiphop #neumos #nickweaver #mc #rap #flow

These next 3 questions were provided by my last interview subject, the band Moon Palace. Moon Palace asks:
4.) What is your favorite road snack?

Nutter Butters. It’s not even close. Nutter Butters are the best thing ever. That sugary peanut butter is making my mouth water as I type this.

5.) Favorite venues to play at?

Locally I really love the stage at Neumos, such a great revamp they did a couple years back. The Crocodile’s sound and room layout is heavenly.

6.) What is your dream band to open for?

Jungle. I absolutely love this band and their live show is so incredibly inspiring. They are a massive influence on where my music is heading.

7.) For my final question, I follow you on Instagram and every now and again you talk about a love for coffee. Where can I find the best latte/cup of coffee in Seattle, and also what was the best cup of caffeine you’ve ever had (be it the beans, the preparation, etc. what made it special)?

Bruh ok, this is my favorite question! In Seattle, it’s Porchlight Coffee and Slate. Those are my top two. My FAVORITE, FAVORITE coffee shop is Pallet Roasters in Vancouver, BC. Their Benchmark espresso roast is perfection. However, the BEST cup of caffeine I ever had? Portland’s Albina Press. I had an almond milk latte. The dude working there pulled an incredible shot of espresso. Crema so thick it looked mud on top. Damn. 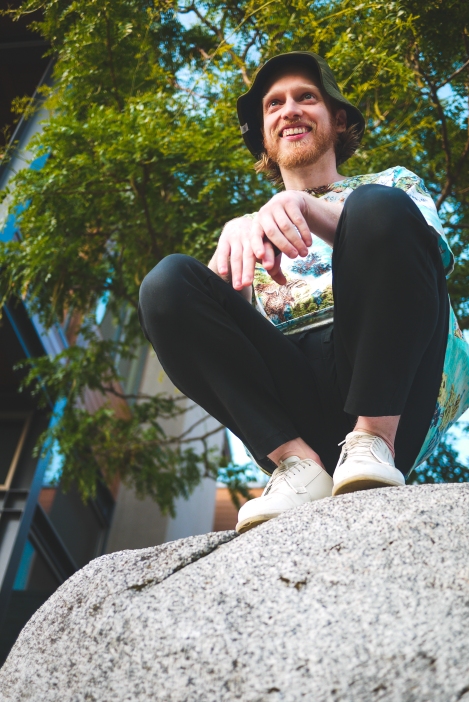 I have to thank Nick Weaver for answering my questions and giving me a new coffee place to try out. Check out his website (thenickweaver.com), and check out his latest singles “Lund” and “Meyers Briggs“.