Bumbershoot 2014 was the first time I saw Tangerine perform live. I had heard a few songs and wanted to check them out. My initial thoughts from seeing them perform were their sound is a lot of fun, this is a pretty sizeable crowd for a local band at Bumbershoot, and it’s hard not to enjoy this performance. The sound reminded me of pop music you would hear in a sitcom that would air in the post “TGIF” generation. Like a sitcom that would have the Lawrence brothers or a movie with Rachel Leigh Cook. 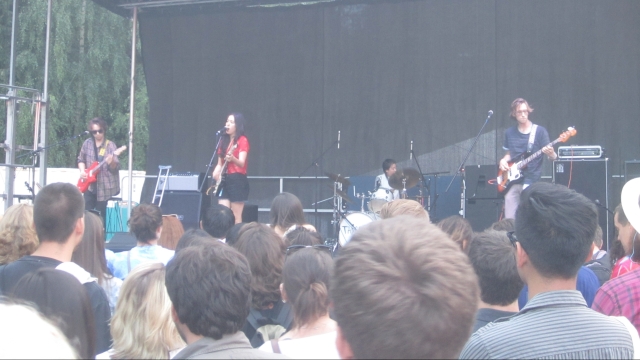 In the years that followed, I picked up their EPs “Behemoth!”, “Sugar Teeth” and “Radical Blossom”, and would try to catch one of their shows around town. I remember catching their set at an exclusive Upstream Music Festival and Summit preview party, and also catching the band’s farewell concert when they relocated to Los Angeles. On February 7th, with a brand new EP “White Dove”, Tangerine is set to make their Seattle return. I was fortunate enough to have the opportunity to ask a few questions to band members, Marika Justad, Miro Justad, and Toby Kuhn.

First and foremost welcome back to Seattle!
I read an interview for Grunge and Art magazine, where as a band you explained that certain bands and genres inspired your sound, but you also mentioned being inspired by movies and television shows, specifically you mentioned the films of Baz Luhrmann (“Romeo + Juliet”). I like the idea of a form of art and entertainment especially one focused on the visual element, inspiring the creation of another form of art and entertainment.
1.) What other films and television shows inspire you currently, and would you mind elaborating how they inspire your sound?

Marika: I’m so glad you picked up on those influences of ours! I have a feeling that a lot of musicians are inspired by so much more than just music. The music you make is sort of like this representation of how you experience the world in all its complexity, so of course all kinds of things find their way into our sound. We’re getting ready to release a new song on February 8th called CHAINS, that has this dark, dreamy, romantic feeling which was inspired by gothic romance novels like Jane Eyre (a favorite of Miro’s and mine that we’ve read many times), plus slightly trashier romance novels we’ve enjoyed that shall remain nameless. We tried to evoke that feeling in the visuals we created to go with the song. That’s just one example but I’m sure there’s more.

In past interviews, you mentioned how as a band you would love to curate the soundtrack for a film or television show, and how some of your songs were made with that possible intention in mind.
2.) Is there a regular storyline that you picture your music being used or you would hope they were used for (for example: A Cosmic Romance, A Modern Day Western, A Teen Road Trip Flick, etc.)?

Marika: One hundred percent we would love for our song Lake City (from our last EP, White Dove) to be in the sequel to Netflix’s “To All The Boys I’ve Loved Before”. We’re all suckers for a good classic teen movie- Footloose, Pretty in Pink, Empire Records, Can’t Hardly Wait, 10 Things I Hate About You, etc. (fuck 16 Candles, no matter what anyone says). I think a lot of our songs would be good during like that moment in every TV drama where they do a cheesy montage of all the characters as they wander around pondering the meaning of life. Or maybe our songs would be perfect for the ending of a movie when somebody’s driving off into the sunset, and it’s a little happy and a little sad at the same time. All of our music seems to end up in that happy/sad place somehow.

3.) Another thing I picked up from reading past interviews was a love for the Sci-Fi genre. What are some must see titles (film, television, teleplay, radio show, podcast, etc.) that you would recommend? (If you name a show, is there a specific episode that is must see?)

Marika: Buffy The Vampire Slayer! The title of our song “Monster Of The Week” comes from the TV concept of the same name and is inspired by Buffy. There’s an episode in season four called “HUSH” that has almost zero dialogue and it’s just weird and fun and completely brilliant.
Miro: The Arrival was one of the more recent science fiction movies that I have seen which really moved me because it teaches about having compassion for the unknown. The soundtrack really beautiful and abstract so I highly recommend checking that out!
Toby: Taken- It’s a miniseries presented by Steven Spielberg that takes place over half a century and focuses on multiple generations of families’ experiences with aliens. Very cool show, the score is awesome too, their theme song has been stuck in my head for years!

(These next 3 questions were provided by my last interview Alaia from the band Tres Leches.)
4.) From your last live performance, what’s one reaction from the audience that stood out to you and how do you perceive that reaction?

Marika: Our last show was for FOMO FEST at the Echo- there was one guy in particular who was dancing in the front giving it his all the entire set that stood out to all of us!

5.) What’s one thing you want to do that you’re not doing right now and why aren’t you doing it?

Miro: I’ve always wanted to tour Asia with TANGERINE! Marika and I are Korean American so performing in Korea is a shared dream of ours. It’s not in our cards for the immediate future as we are touring the West Coast and writing music in LA but hoping that we can make that work soon!
Toby: I’d love to learn to speak Italian, I’ve got family in Naples and every time I visit I deeply regret not having a greater understanding of the language. There are so many things I like to do when I get a spare moment I just haven’t committed to it yet!
Marika: I want to be able to run 5 miles! I can only run 2 at the moment….but I’m working on it.

6.) What’s something that’s not tangible that is vital?

Miro: A constant sense of curiosity. I feel like there was a moment in my late teens and early twenties where I stopped questioning everything around me and lost a sense of awe for the natural world. The more curious I am the happier I have found.
Toby: Optimism. I try to be an optimistic person, for myself and the band, but also in terms of giving people the benefit of the doubt- trusting people, maybe too much haha. It’s certainly been vital to my well being.
Marika: There’s a Maya Angelou quote that is something along the lines of “people don’t remember what you said but they’ll remember how you made them feel” that’s always resonated with me. This question brings that to mind!

As a final question, as a band that started in Seattle, developed in this market, and left, do you have any advice for Seattle artists trying to expand beyond the Seattle music scene?

Miro: My advice would be to really take advantage of the supportive scene in Seattle and the surrounding areas because a strong base will carry you further in the long run even if you decide to leave.

(If you thought this band sounded as fun as they were to interview, be sure to support!  Tangerine will be performing live at Chop Suey, Thursday February 7th with Cumulus, and Emma Lee Toyoda, presale $10.  Listen to their music on most platforms, and be sure to check out their latest EP, “White Dove”, available now.)