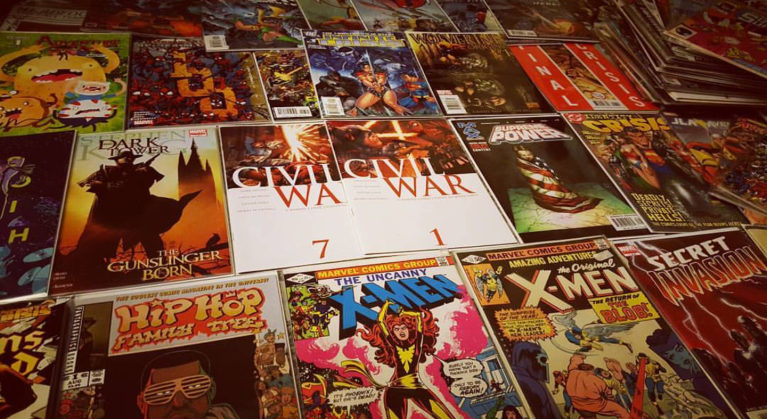 I’m a comic book fan.  I can’t even remember the first time I started reading comics. I remember just always being a fan of Batman and the X-Men, and as I got older the comic book industry as a whole.  I have memories of collecting comics.  I remember reading Wizard Magazine.

A question I’m asked often, “What are some series you would recommend?” Here are “5 Modern Comic Books I Always Recommend “:

5.) Shade the Changing Girl Vol 1 – DC Comics – When the announcement that Gerard Way was spearheading DC’s Young Animal line of comics, I was pretty excited.  In the glut of comic book reboots happening in the past decade, hearing that a guy known more for his work as a musician (My Chemical Romance) and his handful of comic book successes outside of comic book giants, DC and Marvel, was refreshing.  You can’t go wrong selecting any series from DC’s Young Animal line of comics.  From compelling art to abstract storytelling, I’m a big proponent of DC’s Young Animal.  Shade the Changing Girl stands out for it’s beautiful art direction, and story which reads more like a modern sitcom than a comic book.
Who would I recommend this to?: People who are comic book fans, who don’t consider themselves comic book fans (hipsters).

4.) Hip Hop Family Tree by Ed Piskor – Fantagraphics Books – The Hip Hop Family Tree series traces the origins of hip hop as a cultural force in society.  As of now there are 4 volumes filled with unique art and a volume specific discography so fans can research the tracks of the artists discussed.
Who would I recommend this to?: Music Fans, Hip Hop Historians

3.) The League of Extraordinary Gentlemen by Alan Moore and Kevin O’Neill – America’s Best Comics/DC Comics/Vertigo/Top Shelf Comics – The League of Extraordinary Gentlemen tracks an idealized history where all of literature and various pop culture from “1984” to “Pollyanna” to “Harry Potter” exist in a shared reality.  The first Volume sets the stage for one of the most ambitious projects in comic book history.  The series recently ended after 6 collections/volumes.  If there was a single volume of the 6 I would point someone to, it would be Volume 1 where every character, setting, and major object, is a reference to another intellectual property.
Who would I recommend this to?: Victorian Era Literature fans, Folks who enjoy bar quiz nights

2.) Batman: The War of Jokes and Riddles written by Tom King – DC Comics – My favorite story to come from the “DC Universe: Rebirth” line. Before Batman can marry Catwoman, he has to confess to her his greatest moment of weakness, the War of Jokes and Riddles, when the Joker got into a turf war with the Riddler. Villains took sides and in the end, you’ll definitely see Batman and a few of his villains in a whole new light.
Who would I recommend this to?: Fans of “gangster” films and television, Fans of villains

1.) Identity Crisis written by Brad Meltzer – DC Comics – When this came out in 2004, I feel like it brought interest not only back onto DC Comics, but brought interest back to the comic book industry as a whole.  Without revealing too much, this comic starts as a murder mystery focused on B-Level characters, but expands to a larger mystery which threatens to unravel the super hero community as a whole.  By the end, you’ll be left in awe by both the killer and their motives.
Who would I recommend this to?: Anyone