DEFY Pro Wrestling celebrates it’s three year anniversary with DEFY: Year 3 at Washington Hall on January 31, 2020.  I’ve been to every DEFY show at Washington Hall since DEFY 1.  The photo at the top is the first photo I ever took at a DEFY show.  (The rest of the photos throughout this post will be images from the first DEFY show.)  The way I got introduced to DEFY, I remember seeing flyers for DEFY 1 all throughout Capitol Hill.  One day, I went Rancho Bravo and saw a guy with a “321 Battle” patch on his battle vest.  We got to talking, I asked him if he knew anything about DEFY, he told me it was legit (they’re bringing Cody Rhodes to Seattle), and I should check them out.  The person turned out to be local wrestler, Batboy who also performed on the first few DEFY cards. Going into 2020, here are ten things I’m looking forward to from DEFY Pro Wrestling: 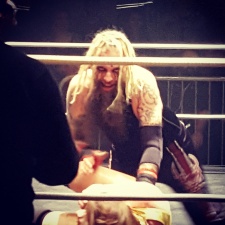 10. More “big name” out of town stars. In no way is DEFY bad at booking outside talent and I love seeing our out of town regulars (War Beast, Matt Cross, etc.), but seeing Strong Hearts and Jurassic Express booked for the next show, I would love to see this trend of new outside talent continue into 2020.

9. Randy Myers quest for the heavyweight title. We saw Randy open the most recent show declaring he wants the belt. I want to see him continue his gauntlet of challengers. Daniel Makabe was a great first test, but I’m curious to see who’s next?

7. A fan booked event. I vaguely remember a year or so back, fans could buy the opportunity to book a future DEFY event as part of a VIP experience. What would a fan booked DEFY event look like in 2020?

6. What will DEFY do with the local lightweight guys? I feel like we see Judas Icarus, Travis Williams, Guillermo Rosas, and a handful of other locals booked against each other in a number of combinations every month. What if there was a DEFY lightweight championship or some sort of secondary title for them to compete for?  I think it would be great if this year’s Super 8x GP was for a secondary belt.

5. In September, Darby Allin cut a promo praising DEFY as the top independent organization in the Pacific Northwest and downplaying every other northwest organization before it. He essentially threw down the gauntlet, and personally I think it would be great to see a company respond. Will a local company invade DEFY to prove who’s the best?

4. Will we see Migs compete in a DEFY ring?

3. More gimmick matches. We get the occasional no holds barred match or War Beast rules match, but Artemis Spencer and Schaff are kind of opening Pandora’s Box with the announcement of a ladder match at DEFY Year 3. I’d love to see more ladder matches at future events, or something just as crazy (cage match, maybe?).

2. Can someone pose a challenge to War Beast? I like War Beast. Every show they’re on, I usually say “Hi! Looking forward to your match.” when I see them at “merch row”, but looking at the current roster, other than the Gunz, I would love to see a tag team pose a serious threat to the War Beast title reign.

1. What will the heavyweight title picture look like? I like Schaff, especially now that he’s turned (everyone can’t be good), but there are a lot of contenders. Everyone from Randy Myers, Artemis Spencer, (since their face off at the last show) Jacob Fatu, Alex Hammerstone, and a number of outside company contenders are all looking for a shot. How long can Schaff hold onto the heavyweight title in 2020?

I don’t know about you, but I’m looking forward to what DEFY has in store for 2020.