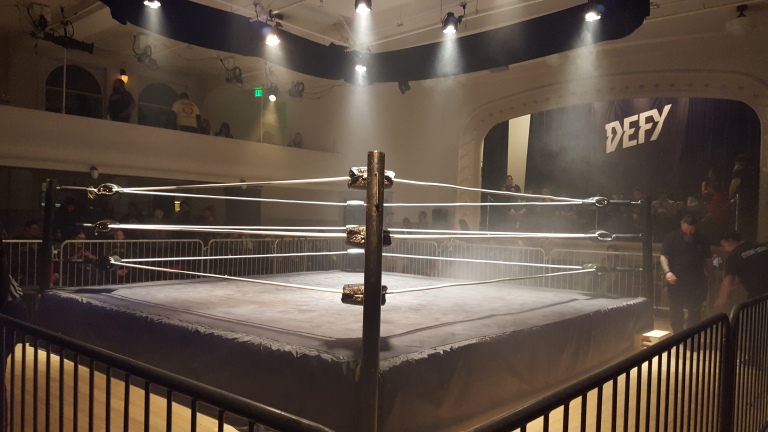 January 13, 2017, DEFY Pro Wrestling (DEFY) changed the landscape of professional wrestling in the Pacific Northwest with the promotion’s landmark event DEFY: Legacy. On that night in the historic Washington Hall, this new promotion began a campaign to turn the Pacific Northwest from the “black hole of professional wrestling” into a territory, nationally recognized talents would be proud to have on their resumes.

The promotion has a defined look, (with Steve Migs on the mic) it has a defined sound, and with the level of talent that is brought in monthly from around the country, it has a defined expectation of show quality. Without question I can say this company has been nothing short of impressive and at times surprising. Whether it’s the Lucha Brothers making their “unannounced prior to the show” debut, to a random fire alarm evacuation, DEFY shows always seem to create memorable moments for the fans. I’ve attended every DEFY show at Washington Hall. Here are five of my favorite moments from DEFY Pro Wrestling’s first two years:

In recent years, I feel like major stars and veterans on the independent circuit have shied away from expressing or “taking a side” when it comes to politics. In a profession that is dependent on a person’s marketability to a crowd, it’s probably best if a talent stays indifferent in terms of political leanings, in order to maximize bookings. Some characters like the sexually ambiguous Randy Myers can build a backing by being both talented and outrageous. Randy is a perennial favorite in DEFY.  During this match, after several failed attempts by Randy to make out with Dreamer, many expected Dreamer to have a gimmicky moment with Randy and just leave the ring, however once he got the win, Dreamer took the mic, and began an impassioned speech in which he basically said that he doesn’t care if you’re a homosexual, straight, or whatever Randy is, professional wrestling is a community that accepts you. You’re welcome here, and it’s one of the reason’s he’s proud to be in it. He then made out with Randy, laid one on the referee, and made his way out of the ring to the cheers of the DEFY crowd.

Thank you for letting us know how you feel, Tommy.

4.) When the fans got loud, and threw stuff.

The atmosphere at a DEFY show in Washington Hall is different. In large part it’s due to the DEFY fanbase, the DEFYance. It’s hard to pick one moment, but I feel like all the moments that created the identity of the DEFY crowd, deserve a spot on this list. Be it the first show when the fan run “Streamer Club” added flair to a wrestler’s entrance by throwing streamers or toilet paper (*Steve West) as they entered the ring, to the two matches (Mexablood and Rey Horus vs British Strong Style, and Artemis Spencer vs Rey Fenix) where the fans showed appreciation by throwing dollars into the ring, to every show where the DEFYance lived up to the slogan “At DEFY, WE GET LOUD!”, the DEFY crowd has built an identity all their own, and it’s these moments among others that helped create that image.

3.) Lio Rush’s run in DEFY.
There have been a number of notable stars that have performed for the DEFY audience. In two years, it’s remarkable how many talents have made their presence felt, only for us to learn that a month or two later they have signed some sort of deal with a major organization and that match they had (or some match set for a later date) was their last performance at DEFY. Brody King, Jeff Cobb, reDRagon, Matt Riddle, etc. It feels like DEFY has become a step, before a major independent star leaves the independents.

Of the “runs” (match series) in DEFY, very few were as memorable as the 4 or 5 matches of Lio Rush. It felt like every match Lio Rush had in DEFY was a contender for the promotion’s match of the year. His style was just perfect for the promotion. He was hard hitting, high flying, and showed a level of perseverance in his matches, that was rarely duplicated. It’s no surprise that he is currently on the WWE main roster. Even if it was short, it’s going to be hard to forget his run of matches in DEFY pro wrestling.

This match had to be the most important in DEFY history. Not only was the match thrilling but it felt like the culmination of the company’s development. At the first show, Shane Strickland was the main event talent representing the Pacific Northwest. Even if he was a nationally recognized “outsider”, Strickland was from Tacoma and therefore represented our region. It felt like the organization was basically built with him as the main event focal point. Strickland won, lost, and helped develop the heavyweight title picture of the organization into something special. At the same time, Artemis Spencer wasn’t as recognized nationally, but his matches in DEFY (and other local organizations) made him recognized as an emerging star. This match felt like a passing of the torch. It felt like Strickland, this well known star outside of DEFY, by losing the belt was saying “DEFY now has it’s own stars and they can contend with anyone outside of DEFY.” Artemis Spencer winning the belt felt like validation of the talent we had been cheering for. That maybe the homegrown talent like Artemis Spencer, Cody Chuun, The Amerikan Gunz, or even Carl the Catch, could make a play on the national stage. 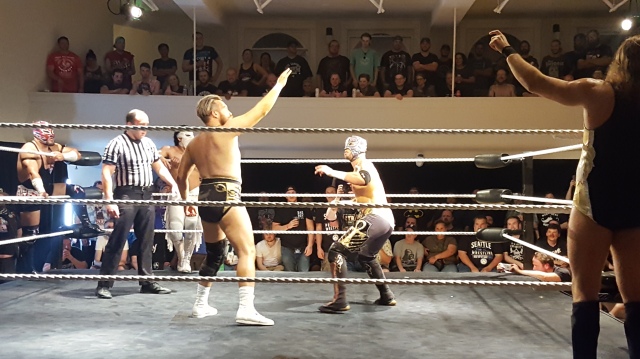 Some of the best matches and most unlikely match ups occurred that weekend. For example, in one show we saw Pete Dunne (the defending WWE NXT UK Champion) take on Brody King (currently signed to ROH) with Lucha Underground ring announcer, Melissa Santos, provide an intro for the match. The first time the DEFYance threw money into the ring was after the Mexablood and Rey Horus versus British Strong Style match. Who knew a piece of paper could raw as many cringe moments as it did when Randy Myers took on Jimmy Havoc? The room was packed. The crowd was loud. I think DEFY left a great impression on the Progress Wrestling fanbase.

In two years, DEFY Pro Wrestling has become the top professional wrestling organization in the Pacific Northwest. DEFY has helped Seattle and the Pacific Northwest, shake the stigma of the professional wrestling community in the area, and helped it emerge as a stop for talents on their way to the top. With as much as the past two years have felt like a rocket ship, I look forward to seeing where DEFY Pro Wrestling will go next. Really the sky is the limit for this fairly new organization.