Aside from my 7am to 4pm Monday to Friday day job, last week was busy.  Monday, after work I went boxing, and then I attended Rhein Haus’ Super Meat Raffle Monday where in the span of a 2 hour period, they not only raffled off deli quality meat, but also raffled off high dollar gift cards.  I walked away with $90 in gift cards while a friend walked away with $170 in gift cards.  Tuesday was a family member’s birthday dinner.  Wednesday, after work I went to a pro wrestling screening at Rhein Haus, followed by Disney Villain Trivia at Optimism Brewery (4th Place), left with a friend for Drag Bingo at The Runaway, and closed out the night with a great concert at Barboza featuring Joza, Claire George, and Maiah Manser. 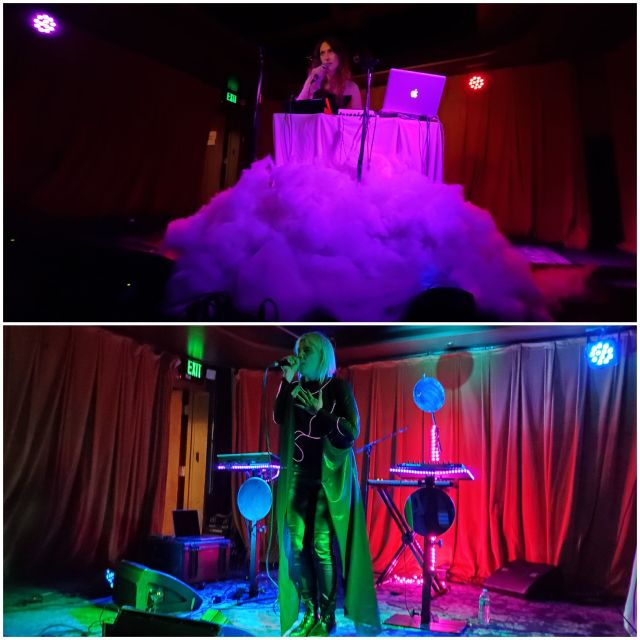 As much as I loved that show and would highly recommend all three performers, the highlight of my week was the Tacocat Halloween show on Thursday night.  Thursday was Halloween.  I was running on maybe four hours of sleep from the night before and decided I would go boxing after work.  After boxing I went to Starbucks and the café was rocking with a Halloween soundtrack.  The cashier after ringing up my coffee looked at me and said, “I got Cranberries on the brain.”  I looked at him confused, but it hit me after a few seconds, “Zombie” by the Cranberries was playing over the speakers.  I made my way to Neumos after finishing my coffee, and upon entering the room, I was immediately impressed by the stage set up.  The stage had sparkled cowboy boots with skeleton flamingos, a woman praying with heavy goth style makeup, a sparkly background with Tacocat and a spider on it, multiple cauldrons, tombstones, and an area in front of the stage barricaded off with a kiddie pool and tarp.

Dog Sister
Dog Sister took the stage a little after 8:30pm to open the show and provide entertaining vignettes between sets throughout the night.  Sporting several outfit changes, I found Dog Sister charming and her between set vignettes were fun if not a little manic.  The vignettes ranged from performing a spell/dumping leaves on the lead singer of Sundae Crush, to a “Britney Spears Dance Break”.  A more memorable vignette came near the end of the night when a mock Jeff Bezos was introduced, ushered into the kiddie pool where he was showered with garbage and eventually hit with a cream pie.  The cream pie hit so hard, the cream hit a number of the audience members directly behind him.  Dog Sister did a great job as the night’s MC and kept the fun going throughout the show.

Sundae Crush
The first opener of the night was Sundae Crush.  From a visual standpoint the band looked great.  The whole band was dressed in various costumes, my favorite being Britney Spears from “Oops I Did It Again” video.  Of the three acts, Sundae Crush was the act I was the least familiar with, but they definitely made a case to see them perform again.  The songs were fun.  Not to mention the lip creature who couldn’t navigate the stage and was essentially blind, why wouldn’t you want to check that band out again?

Donormaal
I’ll be the first to admit, I was wrong about Donormaal.  I’ve seen Donormaal perform at least seven different times in the past three years.  She was normally the opening act for a headliner I was excited to see, and like I’ve done since the first show I attended, I make an effort to watch every performance on the card.  I always felt Donormaal was a mediocre performer and I didn’t understand why so many publications were giving her so much credit as the future of Northwest hip hop.  I saw her twice in 2019, and have to admit, I was wrong.  She killed it and I can totally see how she could be seen as the future of Northwest Hip Hop.  Donormaal announced she would be leaving Seattle soon, but as long as she performs as well as she did that night, then I know she is going to make splash wherever she ends up.

Tacocat
After a brief Raven Hollywood moment, and the Dog Sister vignette featuring the mock Jeff Bezos, Tacocat took the stage.  As they do every year, their costumes were impressive.  It’s hard to pick a standout of the group but I would have to lean towards either Emily as a spirit/ghost, or Bree who was the Space Needle.  It’s one thing to look impressive, but they both seemed like they were having some difficulty performing in their outfits (Emily with the wig and contacts, Bree kept adjusting her hat and the base of the tower kept hitting decorations).  Despite those minor difficulties, if there was a list of currently active Seattle bands that consistently put on solid fun memorable shows, Tacocat has to rank in the top ten, if not top five.  The sold out crowd danced and sang along to all the songs presented from the opening cover of “Zombie” by the Cranberries, to the various hits from their latest album “This Mess is a Place”.  It’s hard to pick single songs that jumped out from this set because the crowd was engaged the entire performance.  The “Zombie” cover was special.  Seeing how hard Lelah would bang on those drums on “New World” was memorable.  During “Bridge to Hawaii” there was an inflatable surf board, crowd surfed around the audience.  Seeing how much the songs from the latest album blended so well with the regular canon was impressive.

Overall, that night was a lot of fun and energizing.  I did my best to get to sleep but still only got maybe four hours in before I had to get up for work the next morning.  Friday was my rest day.  Other than going to my day job and the gym, I stayed in Friday night and caught up on my sleep.  I feel like I did Halloween week right, and in large part I have to thank Tacocat and the other performers I saw that night.  I may have only gotten eight hours of sleep in two nights, but to see that level of talent two nights in a row, it’s hard to say that it wasn’t worth it.

For Photos and Videos of this performance, check out my Instagram: Cakeintherain206