Thunderpussy. It’s a word that without context would confuse and have people thinking it was something dirty, but for people who are in the know, it’s something awesome.

The first time I bore witness to the high energy action that is Thunderpussy, it was 2016. I was wandering the crowd at Capitol Hill Block Party when I saw a band playing songs reminiscent of classic rock drawing a crowd to the main stage. This band’s sound was sexy, fun, and technical. Each member was impressive. It was almost like they were competing on stage for who could draw more attention (Molly won that day, haha). In that set I remember hearing a Led Zeppelin cover, and I remember seeing on the screens the lead singer contorting herself on stage while the lead guitarist ran around with the bass player, and the drummer play hard enough to make you wonder how she wasn’t just running through drum sticks. There electrifying energy motivated me to get closer. By the time I made it within viewing range of the stage (not the screens) they were getting ready to go into their final song. As the song began, the lead singer kept saying the word, “Thunderpussy” and that got me. From that day on, I was a Thunderpussy fan.

Thunderpussy is on my list of “must see” live bands. I’ve seen them perform a total of 10 different times. I’ve seen them debut songs. I saw them perform in a movie theater, at block parties, at Bumbershoot, and I even saw them fill a basement at Upstream Music Fest. I’ve been in a mosh pit with them (Elysian Search Party). I’ve collected merch. I feel like I’m an active part of one of Seattle’s best fan communities. 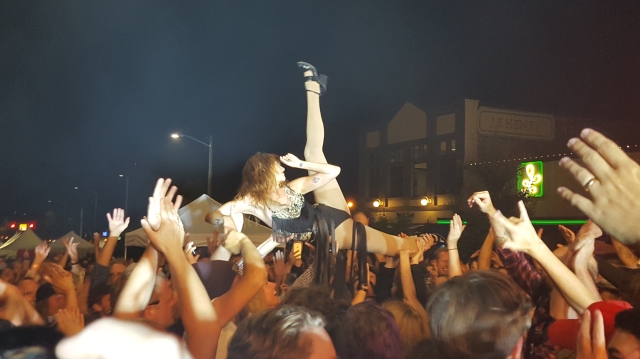 The Thunderpussy fan community is something special. When you go to that many shows, it’s hard not to make friends with the other regulars. I remember one couple introduced themselves to me, by walking up and saying, “I don’t know your name but you’ve been on our desktop screen for the past year.” With a confused look all I could say was, “Okay… why?”. The couple laughed and explained they had a picture of me standing next to the female of the couple while at a Thunderpussy show, and that’s how they recognized me. That same couple had a song dedicated to them by the band at last year’s New Years show (“Torpedo Love”). I have similar stories about how I met other members of this crazy, enthusiastic, and very supportive community, but they all stem from our similar love for these hard rocking ladies. You could say we’re all freinds with a passion for good music and Thunderpussy.

This New Years I’m going to be in the crowd (most likely near the front) for Thunderpussy performing live at the Showbox with Seattle favorites “The Black Tones” and Portland favorites “Red Fang”. This will be my third New Years with Thunderpussy and I’m excited. I feel like it will be hard to top last year’s show. The dancers and the always amazing costumes created the perfect atmosphere to bring in the New Year with energy and excitement. With the release of a great full length debut album and this show serving as the culmination of a tour, I doubt this will be a show that will soon be forgotten. If anything, even without knowing what will happen, I’ve been to enough Thunderpussy shows to know it’ll be loud, sexy, and of course, an electrifying dose of girl power. 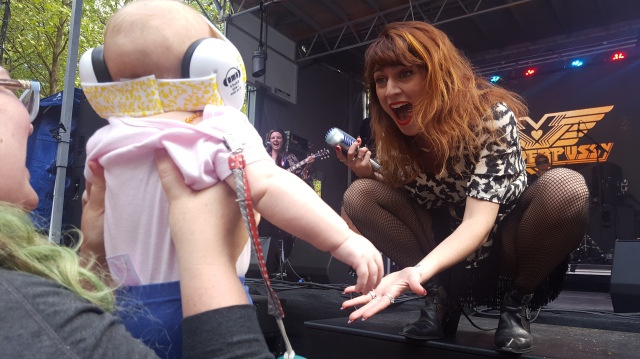 (All Photos were taken by me. The baby one is my favorite, haha)